The contribution of volunteers who have been working on the town hall restoration project was celebrated at an event on 7 June 2022.

The event was held as part of this year’s Volunteers’ Week - an annual celebration of the contribution millions of people make across the UK through volunteering. More than 30 volunteers came together on 7 June 2022 at Fireground, the fire service museum, to celebrate the work they have been doing at Rochdale Town Hall such as conservation, restoration and research.

Working with contractors HH Smith, Hirst, Lancashire Conservation Studio and York Glaziers Trust, the volunteers have proved to be an important part of the major restoration project.

They were joined by Councillor Janet Emsley, cabinet member for equalities, safety and reform, who said: “The volunteers are absolutely invaluable in terms of what they are doing for the town hall project. Without them, we wouldn’t have the resources nor the wherewithal to do half the research that we’ve been doing.

“Personally, as a volunteer, I am researching protests at the town hall, this is both educative and satisfying work. All of our volunteers are very enthusiastic, that enthusiasm is evident in the work that they do, a massive thank you to them all.”

The afternoon included a quiz about Rochdale.

Among the volunteers celebrating was Jacqueline Smith from Middleton who has been working on restoration, preservation and conservation at the town hall. She said: “We’ve been training to clean tiles, research and clean objects and put objects back together.” 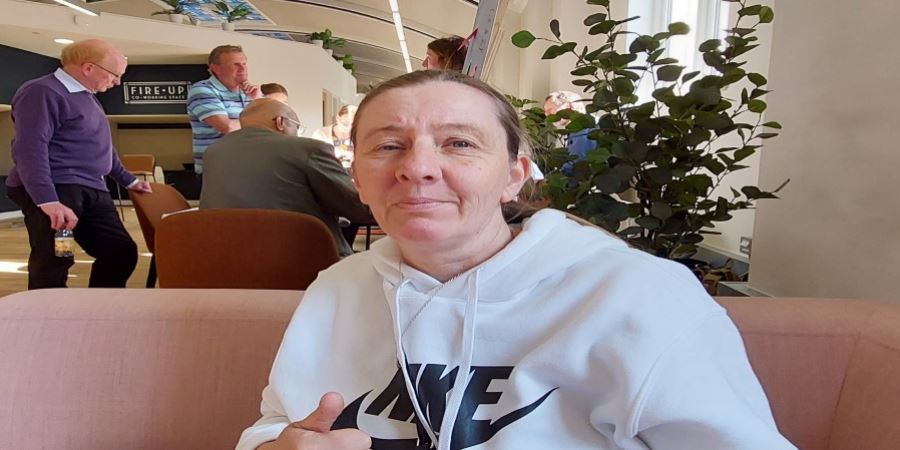 Jacqueline Smith was among the volunteers celebrating.

Jacqueline explained that it’s been a great opportunity to meet people and to find out about things of which she has been keen to learn, and to be hands on, plus benefitting from the training.

“You know what, it’s been good,” she added. “I was getting used to it at first. But then it’s been good to see objects that we’ve cleaned up like the silverware and the tiles. And to find somewhere to have the opportunity to do something hands-on.”

The experience Jacqueline has gained has led to other opportunities. She is now putting the skills she has learned to use in a history group.

Jack Dzundza and Thomas Lonergan have been assisting with conservation at the town hall.

Also developing their skills, in a placement from Huddersfield University, were 2 history students from Rochdale, Jack Dzundza and Thomas Lonergan, who have been doing research on the Lancashire Fusiliers and working at the town hall on assisting with conservation.

Thomas said: “I’ve been up on the scaffolding at Rochdale Town Hall helping the conservators with dusting and cleaning and has been pretty hands-on, it’s been good.”

Jack added: “I’ve been cleaning the panels and working on research doing lots of specific things based around trying to get the populace interested in the town hall before it opens.”

Local artist Victoria Whitaker, known as Doodlher, also celebrated the day and held a workshop with the volunteers to gain inspiration for the new Town Hall Square. The artist will be designing icons and symbols for the stone floor.